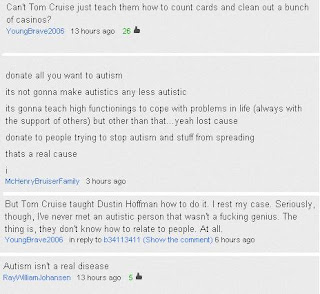 The above comments (click picture to enlarge) are comments that I recently saw on a Youtube video of Conan O’Brien promoting Night of Too Many Stars, which I was actually fortunate enough to attend this past weekend (more on that later), and which airs on Comedy Central this weekend.

To say that I was disheartened when I read these comments is a complete understatement. A great sadness overwhelmed me, followed swiftly by pain-fueled anger; not a sudden, unprovoked rage; but a rolling boil of frustration that never fully goes away, but instead just gets quieter or louder depending on the circumstances.

I know what the response of many people might be to this: They'd tell me that these are random Internet trolls, Youtube is a cesspool of stupid comments, and that there’s no point in paying them any mind. The reason that these comments bother me, however, is that I truly feel like they represent a cross-section of this country, and of the world. They represent the people who have a passing acquaintanceship with autism, but have no reason to ultimately care about it.

And, in some cases, these are the people who work in special programs, schools, and group homes looking after the welfare of people with autism.

That’s why these comments bother me. Because this is the world that people on the autism spectrum have to live in. It’s the world that I have to live in, and it frustrates me that, despite all of the awareness-raising and advocacy work that I and many others have done, people can still cling to these tired notions and view autism in such a negative light.

I’ve heard time and again that the hardest people to bring on board to autism-related causes, to solicit donations and support from, are people who have no connection to autism. My battle is more for hearts and minds than for wallets, but I am starting to see that the fight is just as uphill. I’m not going to stop fighting, even if things like this do make me feel like I’ve lost my footing for a moment.

But I can’t deny that things like this make it all feel like that much more of a challenge.
Posted by Amy Gravino at 2:09 PM 3 comments: